The artwork submitted for inquiry appears to be an original oil or acrylic painting on canvas, or perhaps cotton fabric created by important American artist Alma Woodsey Thomas, (b. 1891 Columbus, Georgia - d. Washington, D.C.).  Some sources list the artist’s name as Alma Woolsley Thomas, although Woodsey is the accepted spelling of her name.  Alma Thomas is noted as an artist and also as an educator.  She is especially known for her very colorful abstract paintings. Thomas is associated with a group of artists known as “The Little Studio” and with the Washington Color School.  Alma Thomas studied at Howard University, Columbia University, NYU and American University and she has the distinction of being the first to graduate from Howard with a Fine Arts degree.  She taught in the D.C. area and only fully devoted her time to painting after she retired from teaching.  Alma Thomas is an ideal role model for aspiring female artists, African American artists and late-blooming artists.  Her first art exhibit was displayed at Howard when Alma Thomas was seventy-five years old and at the age of eighty years old, she was the first African-American woman to have a solo exhibit at the Whitney Museum, New York.  Alma Thomas was active with regard to her career as an artist in the Washington D.C. area and she was one of the key figures who helped to establish the Barnett Aden Gallery in Washington, D.C.

Thomas exhibited her artworks at many important D.C. venues, a few being the Corcoran Gallery, the National Museum and the White House.


From the information and photos submitted with this inquiry, the artwork appears to be an original oil or acrylic painting on canvas that was one from a series of paintings completed by Alma Thomas and based on space exploration and the Apollo 10 expedition.  The painting is titled “Snoopy Sees Sunrise on Earth” and this title is a reference to the nickname “Snoopy” given by the astronauts to the spacecraft.  The Charles Schulz’ “Peanuts” comic strip characters were not official mascots for the missions, but their names were used as call signs for the missions.  Apollo 10 launched May 18th, 1969.  According to information submitted by the present owner of the artwork, the painting was completed by Alma Thomas in 1970.  Some of the space-themed artworks from the 1970’s were untitled, while others featured names from the Peanuts comic strip and some titles referred to space travel, for example, “Launch Pad” and “Blast Off”.  Most of space series paintings were completed as watercolor on cotton or acrylic on canvas and their is a possibility that the painting submitted for inquiry was completed in acrylic paints rather than oil paints as is noted in the submitted information.

I love the bright colors and imaginative interpretation used by this artist to create this painting which is one from a series of paintings completed by Alma Thomas and based on space exploration and the Apollo 10 expedition.  The painting is titled “Snoopy Sees Sunrise on Earth” and Snoopy is a reference to the spacecraft. 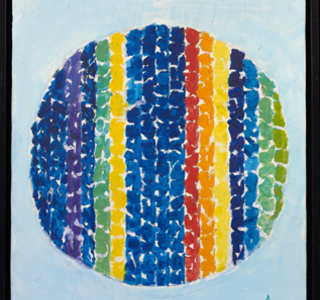